Driving A Class A Motorhome For The First

Driving a large motorhome for the first time can seem challenging — or even stressful. But there are a few things you can do to make your first RV driving experience a positive one as you head off on your well-earned vacation.

When my wife Camille and I started test driving Class A motorhomes, I had barely been in an RV, let alone driven one! We test drove several motorhomes over two months before buying our RV — a 2016 Tiffin Allegro Open Road 32SA gas-powered motorcoach. (Read this article to find out how to choose the right RV for you.) 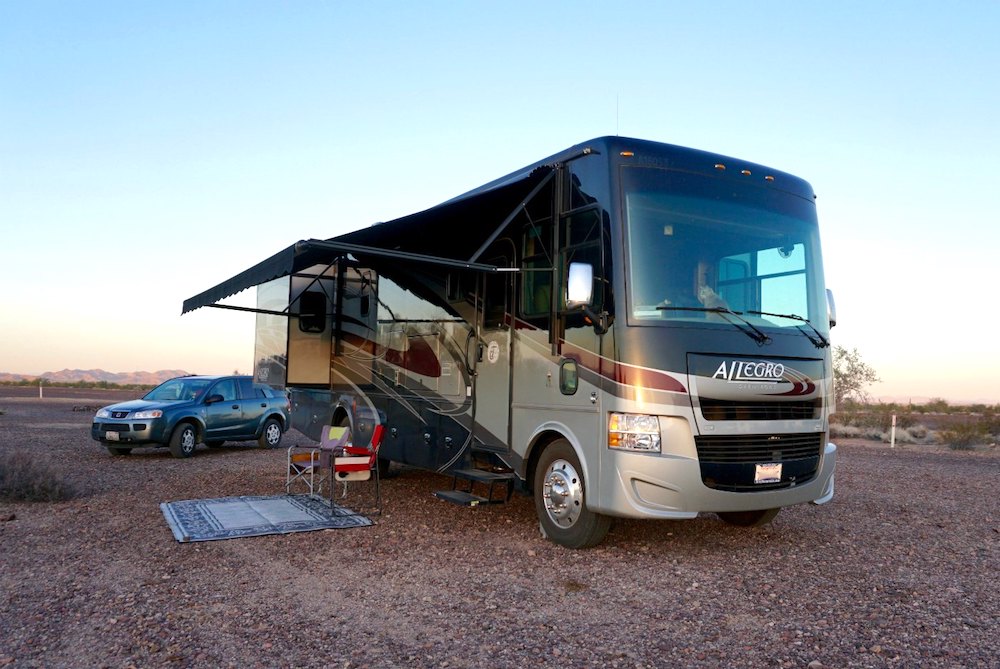 Less than a month before hitting the road to travel full time, we took a 250-mile weekend test trip from our home in Orange County, California to an RV resort on the Colorado River near Parker, Arizona. We had a lot thrown at us on our first drive and were fortunate to learn many valuable lessons that have served us well ever since.

Freeway Driving In An RV

As we set off on that first drive, I felt the absence of my safety net — our RV salesperson calmly guiding and reassuring me during our test drives. We were on our own now! The first miles passed easily along wide, suburban boulevards with courteous drivers and a nearly deserted toll road. And then we merged onto one of Southern California’s notorious freeways.

The most difficult kind of traffic for an RV driver — especially a new one — is what I call fast-and-busy traffic. We were immediately dropped into it. Nearly everyone was driving at least 70 miles per hour, making sharp lane changes and following too closely. I was used to this kind of driving in my car, but not comfortable yet in a 34-foot RV.

I took a couple of deep breaths and tried to settle in. After thirty minutes of white-knuckle driving, I actually got more comfortable. I had already learned some valuable lessons:

Lesson 1: Stay Calm And Drive On

At first, I had felt like nobody saw me. Drivers cut me off or wouldn’t allow me to change lanes. I wanted to yell out, “Don’t you see me? I’m bigger than you!” Then it dawned on me: they did see me, perhaps even feared me and were moving quickly to get out of my way. I learned to accept that traffic would “buzz” all around me but wasn’t interested in bumping into me. 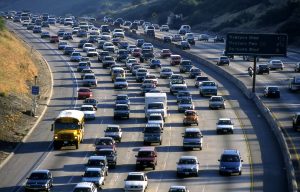 Driving a large RV through heavy traffic was scary at first, but I soon got the hang of it.

I also discovered that motorhomes require more reaction time and stopping distance than a normal passenger vehicle. I quickly learned to give myself at least twice as much following distance as I did in my car. I drove at a steady and predictable speed when possible. And I focused most of my attention on the road ahead scanning for traffic patterns, merging vehicles and brake lights instead of fiddling with the radio.

I had to unlearn some habits from years of driving a car. Learning to rely on my side mirrors and rear camera was a big adjustment. I caught myself looking over my shoulder to check my blindspot as I do in my car when making lane changes. Well, that doesn’t work in a Class A motorhome. The side mirrors and the rear and side view cameras were put there for a reason — and I was going to have to use them!

After a few lane changes, I learned to trust that I could actually see everything. The mirrors and cameras quickly became my friends.

After about an hour and a half on the road, traffic began to thin out as we left the Southern California metropolitan area and got out into the desert. While I welcomed the change, I was already feeling more comfortable in fast, heavy traffic. And on the drive back at the end of the weekend, I was not nearly as stressed. 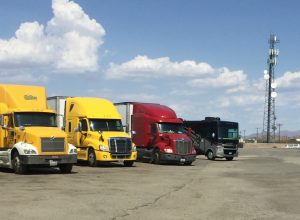 Driving an RV requires a lot more energy and focus than driving a car. Plan for frequent stops to make your trip enjoyable.

We passed the Palm Springs area and after over 100 miles of driving, I began to feel fatigued. My arms and shoulders were starting to ache from the road vibrations and my tight, two-handed grip on the steering wheel. I also needed a mental break from the hours of intense focus.

Camille found a truck stop for us to take a lunch break. During our hour-long rest, we took stock of our trip: We were three and a half hours in and had traveled almost 150 miles. When I had mapped the trip before on my phone app, it calculated the trip would take just over four hours. The math wasn’t adding up.

I discovered that most map apps estimate trip durations for car travel — not RV travel. Car drivers tend to drive faster than RV drivers and take fewer and shorter breaks. My estimated driving time did not include any breaks.

What I Learned About Drive Day

Since that initial lunch break discovery, I’ve learned quite a bit about the “drive day” experience:

Your RV journey will take longer than you expect. We’ve learned to slow down and enjoy the drive.RV travel is more demanding, so you’ll want to take more breaks. I try to take a break every 75 to 100 miles to get out for some fresh air and to stretch my legs.Our preferred travel distance is around 250 miles — and never more than 300 miles.

Like everything else about RV driving, narrow roads took some getting used to — but turned out fine in the end.

Feeling rested from our break, we headed back down the federal interstate freeway before turning onto a two-lane state highway across the desert. The pavement turned rough, the lanes looked narrow and there wasn’t much of a road shoulder. I had to adjust again to different driving conditions.

After a few miles, I learned that a narrow or non-existent shoulder can make your lane feel more narrow than it really is. And even though the lane was wide enough for our vehicle, I had less margin for error.

Thankfully, traffic was very light and I got a better feel for where I was within my lane. On our test drives, the salespeople said it would feel like you’re closer to the center line than you are. I looked in my side mirrors and realized I could get over further and be better centered in my lane.

You feel very wide in a motorhome, but you’re probably not more than one to two feet wider than you would be in a car. I like to drive about a foot off the center line and then yield a little more space to oncoming traffic, if needed (especially for big rigs).

Just as I was getting two-lane highway driving down, I noticed the weather worsening. What started out as a sunny, summer day turned dark and threatening. August and September is monsoon season in the Mojave and Sonoran deserts and a thunderstorm was bearing down on us. What luck!

First, the winds picked up and started blowing our twelve-foot-high motorhome around. They were not only strong 40 mile per hour winds, but also unpredictably gusty. Once again, the drive had my full attention. My wife and I discussed pulling over and waiting out the storm. I got very close to doing that a couple of times, but I felt in control and we pressed on. 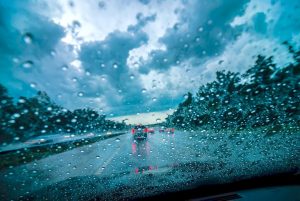 I quickly learned that it is important not to overreact when driving in heavy wind and rain.

As we were being pushed around, I learned not to fight the steering wheel. When the wind pushed me, I let it. I then made small steering corrections to get us back on course.

Making corrections for wind is similar to the steering adjustments needed when being passed by a big rig, or driving on ice or rough pavement. Don’t overreact. Instead, let the coach go where it wants to go, and then make the steering corrections.

A downpour of rain came after the winds. We got to “test out” our windshield wipers, which thankfully worked great and were able to push large volumes of water off our windshield — at no time was our visibility compromised despite the heavy rains. Our coach also felt solid on the wet roads and we had no trouble with our tire traction. After about 30 minutes, the storm passed and it was a calmer last hour to our destination.

Lesson 5: Watch Out For Donkeys 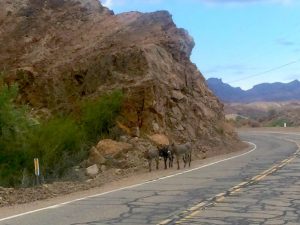 Coming across this family of burros on the roadside felt like an appropriate end to an eventful day.

We were just a few miles to our destination when one last test was thrown our way. On a curvy, two-lane stretch, we came around a corner and were “greeted” by a pack of wild burros along the roadside. At first I was startled, but after easily avoiding them, I broke out in laughter. We had seen it all on our first drive.

We pulled into our resort destination along the banks of the Colorado River. It was about six in the evening and we had been on the road for close to seven hours. Our eventful drive was filled with many lessons learned, and I felt much more confident and prepared for all the driving to come. And I even had fun!

Feeling accomplished and satisfied, it was time for a well-earned beer at the resort’s pool bar. Cheers to your own first drive!

This information is for educational purposes. VIARV shall not be responsible nor retain liability for RVer’s use of the provided information. Prior to making any RV service decision, you are advised to consult with an RV professional.